How fast can we punch? 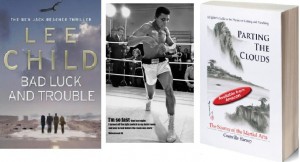 Lee Child has written a string of Jack Reacher novels, all best sellers, and soon his character is to be played in a movie by Tom Cruise.  Jack is a hard hitting unconventional individual that travels around the US with only the clothes on his back and a toothbrush.  He happens to be a 6 foot 5 inches tall heavyweight, is ex-military police and can take good care of himself when put in harm’s way. I recently picked up the 11th Reacher book entitled “Bad Luck and Trouble”. It’s a good and easy read, recommended for overseas flights that could involve long delays.

What particularly caught my eye was that at one point, where Jack was held at gunpoint, the book talks about the punching speed of Muhammad Ali, saying that his hands were timed at an average of 80 miles per hour. That Jack was only as fast as 60 mph maximum but since his armed opponent was a little under a yard away it would take less than 30 thousandths of a second to strike him. This is a shorter time that that needed for his adversary to pull the trigger and fire the gun he was holding, ‘hence’ Reacher hit fast and hard, downed his opponent, and walked away with what he came for.

The problem is that no one can strike that fast; not even The Greatest; Muhammad Ali. The maximum speed attained by a punching hand is around 10 meters per second or 20 miles per hour. There is some evidence ( http://coxscorner.tripod.com/ali.html ) that Muhammad’s hand speed was measured at around 10.5 m/s.  This puts Muhammad Ali right there amongst the fastest, which is remarkable for a heavyweight, but still a lot less than quoted in Lee’s book.

For a complete rundown on the punch and kicking speed or force that can be achieved by martial artists take a look at “Parting the Clouds – The Science of the Martial Arts”.  And yes we all know that Tom Cruise isn’t 6 foot 5 inches tall; but he can act.